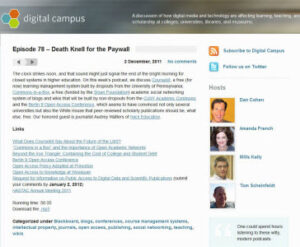 “Death Knell for the Paywall”

In its weekly podcast, the Center for History and New Media (CHNM)  at George Mason University’s Digital Campus featured  “Commons in a Box” as one of three projects that are taking on corporations and developing their own educational technology.