By Scott Voth on December 12, 2011 in Commons Buzz, Projects 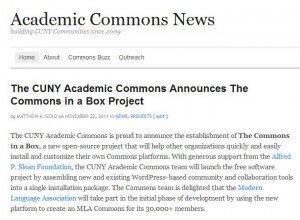 Traffic on the Commons was up 44% throughout the week as news of the Commons In A Box project circulated through academic journals, blogs, and Twitter.  Comments on our initial announcement were numerous – some congratulatory, but most written by representatives of institutions anxious to chat and gather more information.

The same day as the announcement, in the Chronicle of Higher Education “Wired Campus” blog, Jennifer Howard spread the word that the Commons had received a $107,500 Sloan Foundation grant to create what will be called the “MLA Commons.”  The pilot project will create a social network for the Modern Language Association that will connect its more than 30,000 members and help promote their scholarship.  Howard notes that the association had been “exploring new ways to help promote members’ activities, establishing an office of scholarly communication earlier this year.” 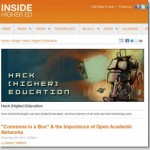 In Inside Higher Ed, Audrey Watters wrote about how open paradigms emphasize a community’s shared ownership of a project and “work” for academics.  The Commons in a Box project “supports an open ecosystem versus a ‘walled garden’” and is part of “a larger movement on campuses to open up academic scholarship itself — not just through (open source) social networking but through open access…”

It isn’t simply that the project will put the tools to create their own academic networks into the hands of schools; it’s that the Academic Commons development team has been sharing its coding back with the open source community, with WordPress plugins for example that have been downloaded over 100,000 times.

Jason Baird Jackson, Associate Professor of Folklore and American Studies at Indiana University Bloomington, blogged about the potential of partnering directly with universities in the development of tools, protocols, strategies, and projects in the scholarly communications.  “For the MLA and its 30K+ members, these software tools will be the basis for MLA Commons.” 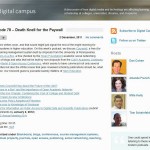 In its weekly podcast, the Center for History and New Media’s Digital Campus featured the Commons In A Box as one of three projects that are taking on corporations and developing their own educational technology.  Panel members spent twenty-five minutes discussing the significance of making the Commons’ “much lauded” social network freely accessible to institutions.  Built with open source software by academic technologists familiar with the pitfalls of other platforms, Commons In A Box will enable “communities of scholars” to develop.  One panel member cautioned that a major stumbling block to the implementation on campuses may be IT departments, whose staff is certified in Windows and Oracle, and inclined to centralized technology.  Commons In A Box de-centralizes technology and puts it into the hands of those who use it. (The audio discussion about the Commons begins around minute 22.)

On Twitter, the Commons Dev Team was universally high-fived: “a commendable work of open source and academia” (@techczech), “Major kudos” (@cogdog), “A Big Win For Open Source in Academia”(@emasters), “Major congrats on the Commons in a Box announcement! You guys do good, good work”(@nowviskie), “The CUNY academic commons in a Box idea is neat…great to see useful and used open source projects funded to scale up” (@tjowens), “Brilliant. Looking forward to this…”(@seanmcminn),  “This is a fantastic effort!” @laurenfklein, Did you see CUNY developing academic commons in a box to help others deploy WP+BP… (@sboneham).

No doubt scholars will continue to weigh in on the significance of Commons In A Box, and the potential of easy-to-install, open-source social networks.  We look forward to working with the Modern Language Association on this pilot project, and thank the Alfred P. Sloan Foundation, which has enabled the Commons to widen its mission and more broadly contribute to the academic community.

Death Knell for the Paywall
Commons Version 1.3 Has Arrived!

Interested in receiving an introduction to creating open courses and other OERs? Sign up for this workshop which will be facilitated by @lauriehurson and @robin_r_miller, taking place this Wednesday at 11am!: tlc.commons.gc.cuny.edu/2022/…

Today at 3:00! Register at the link below to join us in a conversation about student digital portfolios, implementing them within a writing program, and how to pull/scrape data from them for evaluation and other activities! 👇👇We hope to see you there 🙂 twitter.com/cunycommons/st…

This coming Tuesday!! Sign up at the link below 👇👇 twitter.com/cunycommons/st…

You’re invited to register for our 1st workshop session on creating digital portfolios on October 18th from 3PM-4:30PM! Joining us are guest speakers from @CityCollegeNY who will share how they use portfolios for student writing & professional development! bit.ly/3T0ZIbG