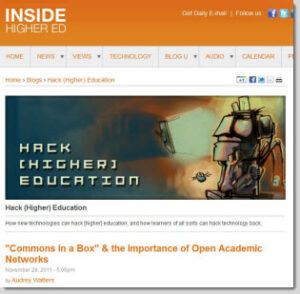 “Commons in a Box” & the Importance of Open Academic Networks”

Audrey Watters reflects on the CUNY Academic Commons’ “Commons in a Box” grant, and notes how open paradigms emphasize a community’s shared ownership of a project, and “work” for academics:

…open source versus proprietary technology isn’t the only thing at stake. Nor is it simply that Commons in a Box supports an open ecosystem versus a “walled garden.” It is that latter piece that seems particularly noteworthy, however, as the project is part of a larger movement on campuses to open up academic scholarship itself — not just through (open source) social networking but through open access…

MLA Parternering with CUNY in Important Scholarly Communications Initiative: Commons in a Box
Death Knell for the Paywall