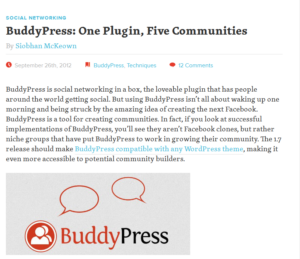 ”The Commons is in the lucky position of having a lead developer who is one of the core committers to BuddyPress. … As BuddyPress’ core becomes more stable and lean, the team at CUNY will be able to build even more custom plugins and functionality, which can be used in the Commons and disseminated to the wider community.”