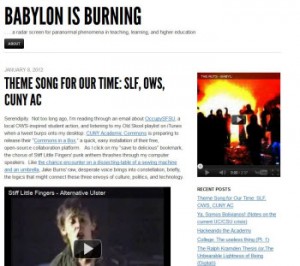 A serendipitous moment, with Stiff Little Fingers’ “Alternative Ulster” playing in the background, an email about OccupySFSU on the screen, and a popup tweet announcing “Commons in a Box,” allows Hanley’s sharp eyes to focus on alternate worlds.  Coming out of The Troubles in Belfast, the 1977 the punk lyrics are angry, but resist nihilism: “Grab it, change it, it’s yours/Get an Alternative Ulster/Ignore the bores, their laws.” The Occupy movement also displays a “desperate hope” to hack together an alternate world.  And the CUNY Academic Commons’ decision to view “application development as collaboration” and participate in the larger Open Source community allows for “new modes and intensities of participation.   Punk imploded the distance between stage and audience, performer and fan.   Open-source encourages similar erasures.”

Some might equate this kind of refusal with chaos or irresponsibility.  CUNY Academic Commons (CAC) instructs us otherwise.  CAC began with a similar refusal. Recognizing a need for community within and across CUNY’s 17 campuses, CAC chose the model of a “social network” over a “static archive.”  This decision, however, was really a decision about ends and means.

Commons Version 1.3 Has Arrived!
The CUNY Academic Commons Will Go Dark on 1/18/12 in Protest of SOPA and PIPA