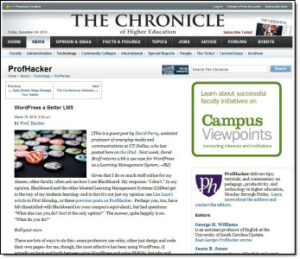 CUNY Academic Commons was featured in “Wired Campus” column of the Chronicle for Higher Education.

Rather than setting the Academic Commons in stone, the committee [on Academic Technology] decided that it would leave the platform design—and the source code—open for user input, allowing it to evolve over time.