A growing number of journals are now hosted on the Commons: 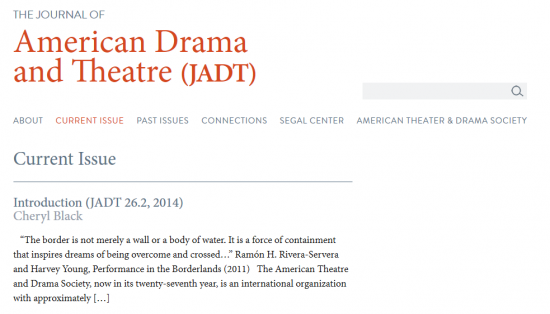 Founded in 1989 and previously edited by Professors Vera Mowry Roberts, Jane Bowers, and David Savran, this widely acclaimed journal is now edited by Professors Naomi J. Stubbs and James F. Wilson. JADT publishes thoughtful and innovative work by leading scholars on theatre, drama, and performance in the U.S. – past and present. Provocative articles provide valuable insight and information on the heritage of American theatre, as well as its continuing contribution to world literature and the performing arts. 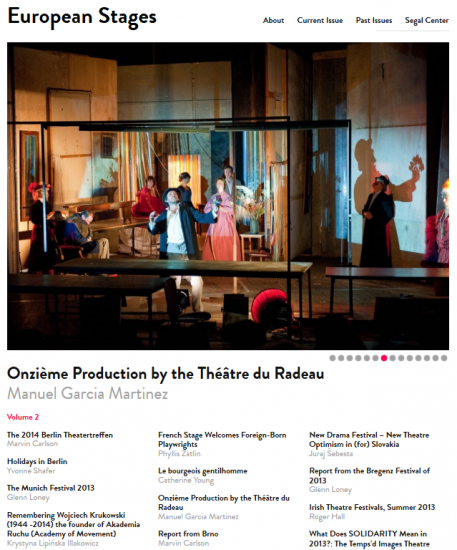 For almost a quarter of a century, from 1969 until 2013 the journal Western European Stages provided one of the most detailed and comprehensive overviews of the season-by-season activities in this major part of the theatre world available anywhere in any language. From 1981 onward, parallel coverage of Eastern Europe was provided by its sister journal, Slavic and East European Performance, edited by the late Professor Daniel Gerould. …

The European continent has undergone radical changes during this quarter century. When WES was founded, Eastern and Western Europe were two quite distinct political and theatrical spheres. With the disappearance of the Russian control in the East, the rise of the European Union, and the rapid increase of productions combining the artists from a variety of countries, east and west, this cold war division today is largely an historical memory politically and theatrically. Thus, in 2013, these two journals combined their activities to reflect this more integrated continent, and metamorphosed into European Stages. We hope that the new, merged resource will continue to provide English-language readers with the most comprehensive source available on current theatre in this most important area of such activity.

Journal of Interactive Technology and Pedagogy 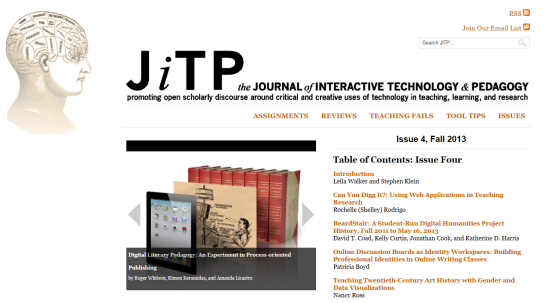 The mission of The Journal of Interactive Technology and Pedagogy (ISSN 2166-6245) is to promote open scholarly discourse around critical and creative uses of digital technology in teaching, learning, and research. Educational institutions have often embraced instrumentalist conceptions and market-driven implementations of technology that overdetermine its uses in academic environments. Such approaches underestimate the need for critical engagement with the integration of technological tools into pedagogical practice. The JITP will endeavor to counter these trends by recentering questions of pedagogy in our discussions of technology in higher education. The journal will also work to change what counts as scholarship—and how it is presented, disseminated, and reviewed—by allowing contributors to develop their ideas, publish their work, and engage their readers using multiple formats.

We are committed first and foremost to teaching and learning, and intend that the journal itself—both in process and in product—provide opportunities to reveal, reflect on, and revise academic publication and classroom practice. 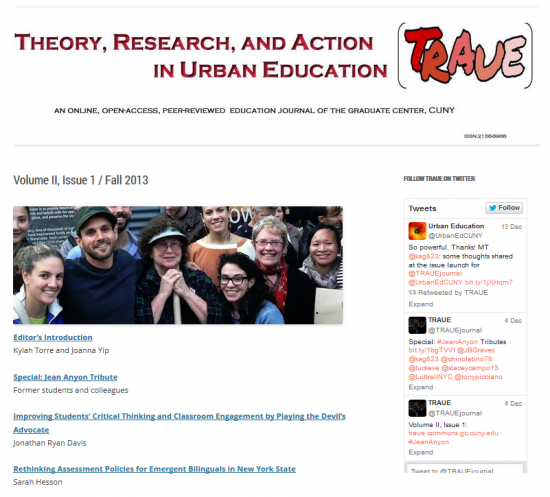 Theory, Research, and Action in Urban Education (TRAUE) is an open-access, peer-reviewed online journal published by doctoral students and recent graduates of the Graduate Center of the City University of New York. This journal is one of very few that features original work by emerging scholars. TRAUE also serves as a forum in which youth, public school students, educators, community groups, and parents debate issues of educational practice and policy.

We publish articles, reviews, policy briefs, and notes from the field that critically and politically engage with issues of equity in urban schools and communities. We value theory, research, and action that is political and undertaken in collaboration with schools and communities. Our mission is to develop and share tools for imagining and enacting sustainable, systemic educational and social equity. Submissions to this journal should advance social and educational equity, have a strong theoretical grounding, and be well written with fully developed ideas. 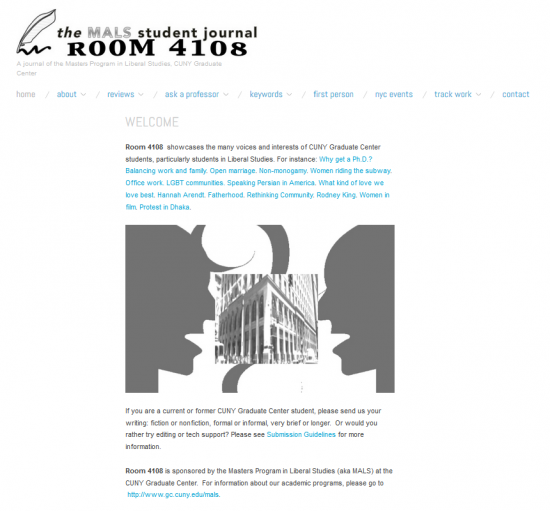 Room 4108 is named for the room where we got our start. There, one late afternoon at the beginning of fall semester 2013, students from the Masters Program in Liberal Studies got together in order to brainstorm about the kind of online journal we would like to have. Interdisciplinary! International! Intellectual! Inclusive! Inspired!  But the Liberal Studies that made those grand visions realistic, also made them difficult to realize. We were too busy being all those things to write about them. Room 4108 was named in honor of those grand visions and its mission is to realize them. Liberal Studies is remarkable for the diversity of its students. Room 4108 is our group portrait. 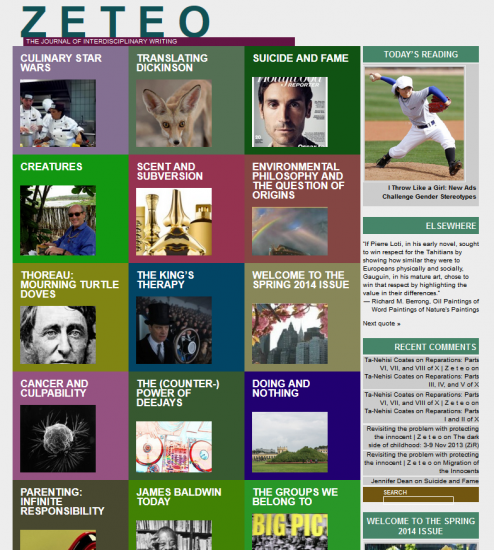 Zeteo: The Journal of Interdisciplinary Writing provides a bridge between the study and reflection of interdisciplinary writers and the concerns of a wide range of Zeteo readers. Published biannually, the next issue of the journal will appear in the Fall 2014. If you are interested in contributing an article or essay or learning more about the publication, please see the Call for Articles and Essays, or e-mail us at zeteojournal@gmail.com.

Please note that you can now subscribe electronically to Zeteo, or to certain “categories” of Zeteo (which we pronounce zeh-TAY-o). For example, you can be alerted when new book reviews are posted. Please click on Subscribe or Contact.

As of  2013, the Zeteo initiative comprised three parallel projects:

Zeteo was founded by alumni and students of the City University of New York’s Masters of Liberal Studies Program. In the summer of 2013 Zeteo became an independent journal. 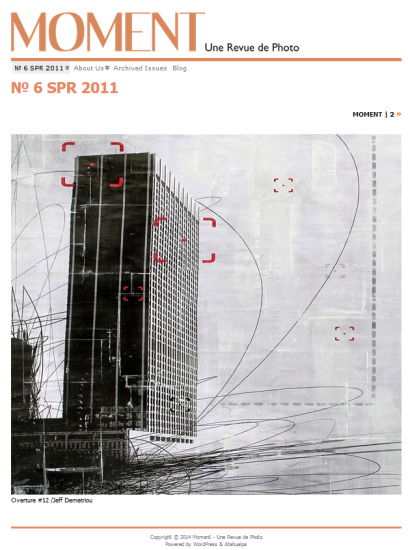 Yes. Moment: Une Revue de Photo is out…complete with its own imperfections.

How did this happen? Well, I always wanted to create a photography magazine. I thought editing a magazine was like managing a photography-gallery. Except, and mea-culpa if I am wrong, that a photo-magazine…lasts longer than a exhibit in a gallery. There is a sense of eternity in having hard copy.

Here I am in Cusco, Peru with my friend Mario Guevara, who is a professional writer and editor of a wonderful magazine called Siete culebras (seven snakes). Mario suggests to me that we create and publish a photography magazine. “You send me photos and money and I will create the magazine.” Of course I am flattered by his suggestion, but how can I do this? No se nada sobre revistas. J’e ne se pas.

I meet many photographers who encourage me, among them is Lorrie Palmer from Positive Focus. Everyone is enthusiastic about the project, but publishing a magazine requires funding. I looked for financiers and I find them…they are my friends and colleagues…Alizabeth Towery, Angel Amy Moreno, Paul Robinson, Carlos Henderson, Eva Kolbuszand Leo Theinert. They provide the funding … and we finally used a French name…Moment: Une Revue de Photo. …

You heard Dr. Brandle 👇👇👇 Come check out the #CUNYcommons– we have your course sites, projects, portfolios, and more covered 👍 twitter.com/ProfBrandle/st…

Interested in expanding your pedagogical toolkit with the use of open tools, such as the #CUNYcommons? Several members of the Commons Team will be facilitating workshops on digital pedagogies and course site building at #tCUNY! Join us by registering here: tcuny2021.commons.gc.cuny.edu twitter.com/GCTLC/status/1…

Have you had a chance to read about the various #OER-centered updates coming to the #CUNYcommons? Check out this thread to learn more 🙌 twitter.com/cunycommons/st…

In the meantime, please let us know of any OER work you think we might have missed! We hope you enjoy these new features, and as always, we invite you to send us your feedback as you explore them. You can reply to us here or email support@cunycommons.zendesk.com. Thank you, all!

Except where otherwise noted, content on this site is licensed under a Creative Commons Attribution-NonCommercial-ShareAlike 4.0 International license.